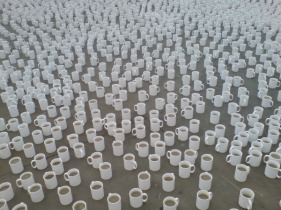 I love this word. Two images come to mind when I hear jangly. First, I picture a dozen silver and gold bracelets on a woman’s arm, clanging musically against each other as she talks animatedly, moving her hands about. The bracelets sound all jangly. Second, I think of jangly nerves. As in, “Marilyn was on her second espresso that morning and her nerves were jangly.” According to the Oxford Dictionary, to jangle is to “make or cause to make a ringing metallic sound, typically a discordant one.” And isn’t that exactly what happens with your nerves after a boost of caffeine? You have a feeling of discord within. Etymology online adds that it comes from the Old French verb, jangler in the 13th century, and means “gossip, slanderous conversation, dispute”. I see that applying to nerves too. When we’re hopped up on caffeine, it feels as though our body is in a slanderous conversation with itself. We can’t sit still. Our nerves are jangly. What about you? What do you think of when you hear jangly? Thank you to Marilyn for inspiring this post. And side note, I have trouble envisioning Marilyn actually being jangly. She is far too poised a person for that. But I thank her for letting me use the imagery of her Facebook post as a launching pad.